Heard from Gerry yesterday (who, like most of us, is itching for warmer weather!) who was walking in the Woodlands Garden in Bushy Park where he bumped into Mike Brown who works there and both chaps are well.

Isle of Wight Ron has finished his sessions of treatment and is hoping to get down to the Isle of Wight for a couple of weeks in April.

Joan O’N was felled by the high wind last week whilst putting out her recycling and banged her head.  Fortunately her neighbour was putting out recycling at the same time, heard Joan’s cry and promptly organised an ambulance.  A lady who was taking a small child at the school stopped on her way back and waited with Joan for the ambulance and then appeared on Joan’s doorstep on Saturday with a bunch of tulips.  There are so many kind people around.  Joan is ok but has to take it easy for a few days, so Bernard is looking after her.  She is ok for shopping as Bernard and her neighbours are rallying round.

Sheila M wrote off 2020 as a rubbish year and is hoping it won’t be the same for the remainder of 2021!  It seems a long slog to our next stages of freedom.  We’re all feeling that in spades!

Sheila had heard that sadly George Parsons had passed away.  George and Joyce bowled at Barnes Lonsdale until it closed then moved to Cambridge Park outdoors, although that must have been over 10 years ago.  I don’t believe he’s bowled for quite a few years now.  We send condolences to his family.

Margaret B has the hanging baskets ready on the back burner.  Won’t it be lovely seeing them adorn the front of the clubhouse again?  She does a great job with them as well as the jams, marmalade and pickles.  Don’t forget to save your jam jars which she can arrange to collect at the club.

Eric P says he’s ‘still hobbling with a stick’ but is looking forward to getting back to playing bowls indoors.  Eric has fond memories of browsing through The Open Bookshop in King Street (next to the Q Fish and Chip shop, just between the corner of the former House of Fraser and Richmond Green). 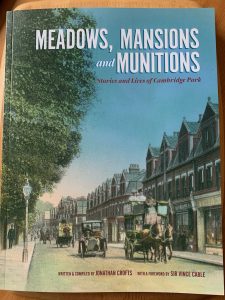 The Open Bookshop have copies of Jonathan Crofts’ recently published Meadows, Mansions and Munitions book, which covers all of the local history of East Twickenham and why Cambridge Park – the area – came into being.  It starts way, way back and concludes at the back end of 2020 with the current pandemic.  It is a wonderful book for those interested in history and the chapters make it easy to dip in and out of it.  Loads of photos.  You can click and collect from the bookshop or order on theopenbook@bconnect.com or 020 8940 1802 .  The book costs £17.  I’m not sure of their delivery charges if they have to post copies out but if you want to buy a copy, I can collect and deliver it to you.

There is a photo in there of Aldwych Speedskating team who came to Richmond Ice Rink.  I’ll need to do a closer inspection to see if Gerry is in it!

We’re always happy to get your news to share and we’ll keep you updated on when the Club will open again.  As you know, we will be open as soon as we are legally allowed to.  It can’t come soon enough.

Terry has had a couple of volunteers to help him with work around the green but the benches will need varnishing and we’d like to shift all that ivy covering the garden areas, so we can do some more planting.  We can meet in two’s to do bits and pieces now, then groups of six after 29th March.