I’m afraid Comic Relief Day has sort of slipped by what with everything else that is on around us.

Relief in the form of humour is good for all of us whether we can afford to donate to the BBC Comic Relief charity or not.

Radio 4 Extra have a selection of comedy programmes … I see Dad’s Army is on today; as well as Clare in the Community and Tommy Cooper.  Has comedy changed over the years?  I certainly think so.  What made us laugh out loud in the 70s seems very dated and definitely very non PC.  (I caught an episode of The Liver Birds a few months ago and it made me cringe!)   Some of the programmes now go completely over my head and I cannot for the life of me wonder how anyone finds them funny but people do, which is good for the programme makers.

Last night, I did catch most of the programme “Billy’s Big Red Nose Day Challenge” which follows Billy Monger’s 140 mile triathlon in 5 days to raise funds for Comic Relief.  Billy had a motor racing accident in 2017 resulting in him losing both his legs.  He returned to F3 driving just one year later.  Plucky or what?!  Anyway, in this programme he sets out to raise funds for Comic Relief.  You will smile and certainly laugh with him at the end but to watch him cycling up some of those hills will have you crying too.  Unlike most people, his prosthetics won’t allow him to stand up on the pedals, which is what most cyclists do to climb up hills.  He has to accomplish this by sheer determination and pain.  He finishes the 140 mile goal by walking 3 times around Brands Hatch.  The amount he has raised for Comic Relief will be revealed on the BBC tonight.

A remarkable young man of only 21 years raising funds for others in a worse position than himself.  I take my hat off to him.

Are you/any members of your family/your neighbours doing anything for Red Nose Day?   Even if you’re not, don’t forget to find something to laugh at today and feel better because of it! 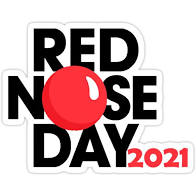