CONGRATULATIONS TO THE FAB FOUR! 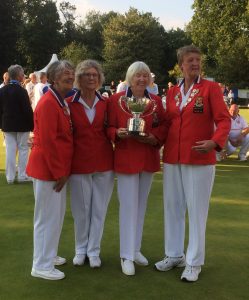 Winners of the Ladies Fours at the National Championships at Victoria Park, Leamington Spa on Thursday 10th August

Although no strangers to the National Championships, having reached the quarter-finals in 2010 and the semi-final in 2012, the Cambridge Park Fab Four started their challenge for the 2017 trophy on Monday7th August in glorious Leamington Spa.  The draw meant they had to play an “Early First Round” in which they toppled a Lincolnshire 4 by 26-13.  Great start!

Bright and early on Tuesday morning, the girls donned their Middlesex uniform and headed off to support the team from Grovelands compete v Herefordshire.  Undeterred by their loss, Ann, Jean, Nadine & Cathy launched into the second round v Northamptonshire and after a tense battle came through victorious 25-21.  Phew.

The heavens opened on Wednesday morning when they headed off to play Leicestershire at 9.30 am.  (Rumour had it the supporters were not over impressed by the early start!)  In yet another tense match where the Middlesex President’s nails were bitten down to the quick, the girls triumphed 20-19 on the extra end.  Not content with the emotional and frazzled state of their supporters, they launched into the quarter final v Cornwall and managed to grab the bull by the horns for a 16-14 victory. following yet another nail-biting match.   Hardly daring to peer through the fingers in front of their eyes, the supporters cheered the team on to a 25-16 semi-final v Cambridgeshire, skipped by World No.1 Ellen Faulkner, who had been interspersing the Fours with the Champion of Champion competition—no mean feat.  By this time, the sun was shining across the greens and the mood was extremely buoyant as they stepped onto ‘A’ Green for the final.  All those matches and all that way to play next door county rivals, Surrey!

They knuckled down with true grit and determination as the tension mounted.  To be fair the Surrey lead never really got going but the No.2 more than made up for it with consistently landing her woods next to the jack.  A surprisingly poor 17th end by the Surrey No.3 leaving their skip to a difficult save, gave our girls the chance to go a few shots into the lead. It was still anyone’s game though when it reached the 21st end but Cathy put a dream of a bowl right on the jack loading immense pressure on the Surrey team.  It was down to the last two bowls by the Surrey skip who missed trailing the jack back to 3 waiting woods (which would have given them the win) by a cat’s whisker and a very relieved Ann did not have to bowl her final wood.   Actually I think it was all the teams’ supporters who were as relieved as Ann!