On Wednesday, we see the first of the 3-Way Triples games at Cambridge Park.  Start time 2.30 pm, spectators welcome.  Each club will provide two triples and a draw will made to see who plays who.

Small match fee will be collected by Audrey who will arrange prizes to be awarded after the Strawberry Hill round.

Well done to Colin Hammond from Teddington and to Audrey for organising this.

Sign up sheets for the second and third rounds will be up this week.

PS  Don’t forget to keep washing your hands, using gel and signing in at the Club as we have a Duty of Care for Track & Trace.  Thanks.

We’re sorry you’ve missed out on your celebraton cruise, but we hope you have a wonderful day with the family.  Have they got jelly and ice cream lined up?!

Thanks for all you’ve done for the club over the years and for all that sewing and crocheting to help the NHS at Teddington Hospital  during  the  first  four  months  of  lockdown  when  those headbands  were  so  desperately  needed  for  the  frontline  staff  and  care  workers.

Well, it’s another glorious morning with the sun shining but doesn’t seem quite so oppressive a heat as the last couple of days.

This morning 8 pairs are taking to the green to battle it out.  There’s no trophy (unless Norman brings one of his teaspoons!) just, 4 good competitive matches.  We’re starting at 10.30 am.  The bar will be open from idday ifyou fancy a cofee or a beer whilst out on your walk.

Yesterday it was a cracking match v Ashford.  Good to welcome Kevin L to his first match for Cambridge Park.  Thanks to Brian N and Dav W who came in at the very last minute for two poorly players.

Lucy H played a blinder.  She could have bow led through her legs backwards yesterday and still been on the jack!  A comfortable win for her with Ange and Gym.  There was another comfortable win for Margaret B (first match this season) ,  Gordond and Dave P; on paper, a heavy loss for Pete T, Kevin and Dave W but it was a very not aggressive but attacking game against  Ashford’s Captain Mark and his team and an honourable draw for Steve G, Brian N & Dawn.

Thanks for Gordon in his first Match Captain role and to Jane for keeping us hydrated!

For those eagerly waiting to get indoors to bowl, I’m afraid you will need to exercise a little more patience.

The EIBA has not changed its guidance but there is a lot to put in place at the club so we can ensure you are in a safe environment.  We will keep you updated.

It may not bowl you over, but some of our team and Ashford’s team would like to be home in time to watch the FA Cup Final at 5.30 pm between Arsenal & Chelsea.  We’re expecting Norman to be waving a Chelsea flag between ends!

So, the match v Ashford will start at 1.00 pm on Saturday.  The bar will be open from about midday.  The weather looks good!  Why not bring a picnic lunch down and enjoy watch the bowls and catching up with other members?

It would be good to see you.  Last week if was somewhat wet, although Reg did brave it under the shelter!  Gold star for Reg!

On Wednesday 5th August, Teddington and Strawberry Hill will be bringing two triples over to play along with two triples from Cambridge Park.  Draw for who plays who on the afternoon.

A lot of the Teddington and Strawberry Hill players belong to CP indoors, so a good chance to catch up with ‘old’ friends.  Spectators welcome.

I see from the list this morning, that we have plenty to play.  Gordon is the August Captain and will be selecting teams.  If any of you can bring some cake to enjoy afterwards, that would be good.  Thanks

We do have a lot of obsolete bowls that you are welcome to collect if you would like to make a water feature or clock out of them, but this is much more exciting!

Ange & Scott are donning their organisers’ caps then adding aprons and waving their tongs as we get together for a CLUB OPEN PAIRS event on Saturday 15th August.  You can play with whom you like and there will be a BBQ around lunch time.  (Neither Fillet Steak nor Beef Stifado will be on the menu in case you were thinking about putting your order in now!)

After the round robins on Saturday 15th, the winners of each group will go on to play in a knock-out competition on Sunday 23rd August where players and spectators can enjoy Ange’s Chilli, Beans, Cheese and Jacket Potato meal.

More details from Ange if you need them!

For those of you heading back to work this morning, rain on a Monday is the last thing you want, isn’t it?   However, it is going to dry out later and by the end of the week – Friday – it should be 30C.  The forecasters weren’t brave enough to mention the weekend when we take on Ashford on Saturday afternoon at 2.00 pm.

Yesterday morning the slight drizzle held off and it turned out to be a lovely morning weather-wise and bowls-wise with a 3-0 rink win v Hampton.  Hampton had one bowler in each triple for whom it was their first match.  Certainly Martin on our rink had a great game and didn’t appear to be a novice match player at all!

Jane did a good job on the bar with the new till (card payments are preferred to reduce cash handling) and you are now allowed to go to the bar to buy your drinks.  There is signage in place as it’s a one way system – keep left to go in front of the outdoor notice boards, wait to order and pay at the front of the bar, then move to the right to collect your drinks and return to the dining room exit via the indoor noticeboards.  I can hear some of you walking this through in your heads.  Good!

You cannot sit at the bar and have your drink so the stools have been moved to reduce temptation to go back into old habits.

We don’t have a date for opening indoor bowling yet.  We have to ensure all safety measures are in place before you run riot on the green!  Further updates later this week.

…. but we had a good 12 ends before we had to call it off.  It was very nice to socially distance with tea and cake, almost like the old days …. well four months ago anyway!

Tomorrow we take on the Hampton IX at 10.30 am.  Spectators welcome and the bar will be open after the game or probably from midday anyway.

Sign up sheet for Club Back2Bowls Pairs Competition up in the lobby.

We are not ready to open indoors yet but hopefully within another week. 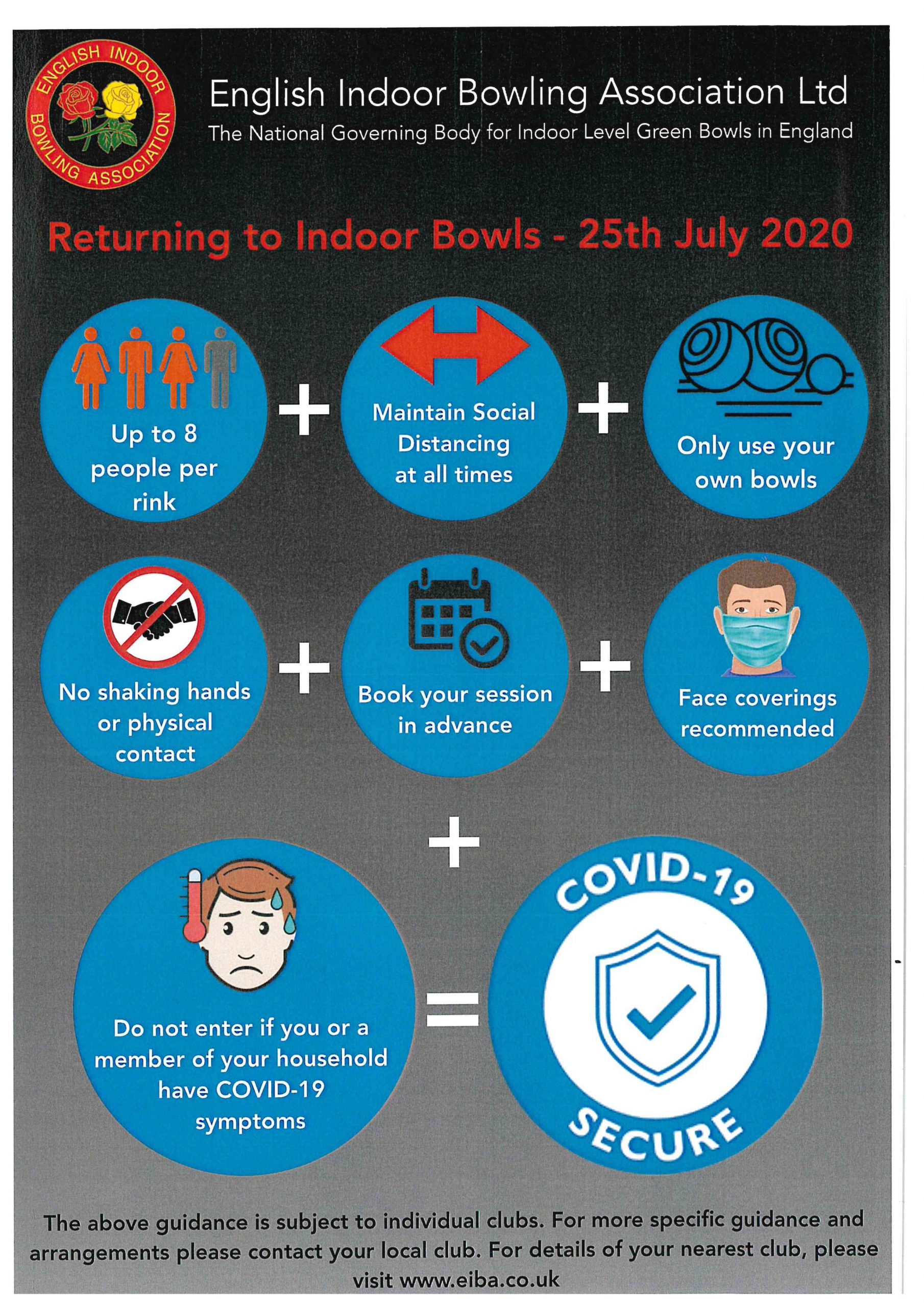