One day down and only 27 to go of the National Lockdown and 197 days to the Anniversary of the first ever match at Cambridge Park!

So, thinking ahead to our Centenary next year, I opened the photos that Paul Reynolds had dug up from the Middlesex archives.  This included details of the opening match on 21st May 1921.

One of the teams playing in the match came from Richmond Bowls Club with a Mr Staples in the team ! 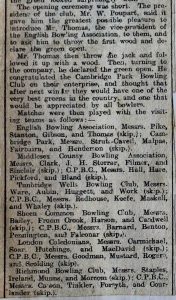 Do you remember your first match at Cambridge Park?

I had a coaching session with Margaret B on a Wednesday afternoon in May 2011 and she thought I had an aptitude for the game and if I practised I would be able to play in the odd friendly match “in 2-3 weeks time”.  About 15 minutes later, she said “Are you free on Saturday afternoon?” !  I don’t remember too much apart from the excitement and nervousness … and my bowls not exactly being near the jack!  Maurice Byron was my skip for that match and Ron Petch the skip for my first indoor match.  Margaret, Maurice and Jane and other club members were really kind to such a complete beginner.  If it wasn’t for the way they looked after me, I probably wouldn’t still be playing!