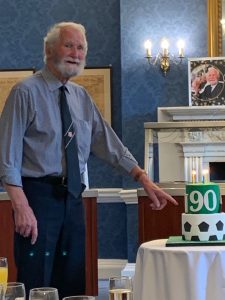 A bit late as I mistakenly thought George’s 90th Birthday was coming up on 3rd August.  Wrong!  It was last Wednesday 28th July so belated greetings from all of us and thanks to everyone who signed his card.

George’s daughter who lives in the UK (as opposed to his one that lives in California and couldn’t escape over here for the occasion) organised a Surprise 90th Birthday Party for George at Moor Park Golf Club.

When he visits Amanda, it is not unusual for George to take Amanda and Chris to the golf club for lunch which is what he thought he was doing today.  Imagine his surprise when he walked into the room and there were 30+ family and friends there including those he worked with at BHS over 20 years ago!  They had travelled from as far as Bath and Derbyshire to be there.  What an tribute to how much George has meant to them over the years. ( I felt very priviledged to be included in the guest list representing Cambridge Park.  Unfortunately some other club members were unable to make it.)

When I joined Cambridge Park, I was told that George was a solicitor’s clerk, but, apparently he took that job after he retired from being a (the?) top designer for BHS store windows.  WOW.  How amazing is that?  Did any of you know?

A few years ago when he moved from his house, George gave me two part rolls of red and green fabric for our amdram group.  “They’re very good quality” he said.  I couldn’t understand why a solicitor’s clerk would have rolls of fabric and said “Thanks very much”.  He didn’t.  It was from his previous job!

Anyway, this afternoon was a wonderful event and George rose to the occasion.  It is so difficult to believe he is 90 years old. He was very touched and spoke briefly but eloquently with genuine thanks to everyone when he cut the cake – which was a tribute to his love of football, cricket and bowls. 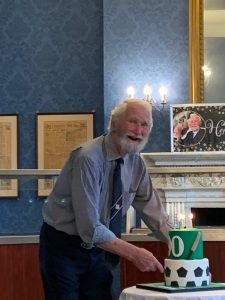 family and all those who have come into his life over the years.

When his daughter and husband sang Happy Birthday on the video clip, it had George reaching for his hanky.  To be truthful, it had all of us reaching for the Kleenex. A truly moving moment.

There should be some cake coming back to dish out at the Monday League.  George is off to Lords tomorrow to watch the cricket. Fingers crossed the weather stays dry for the cricket as well as for our bowlers in their semi-finals and finals.