Hands up who has a petrol or diesel fuelled car?

Hands up if you’re saving for a ‘green’ car?

So many questions.  At least today’s news knocked Covid and Brexit off the top of the headlines!

I was thinking 2030, that’s years and years away.  It is but only 10.  I hope I will still be driving at 75, but who knows.  Despite all good intentions to reduce emissions, I doubt I will have gone ‘green’ by then.

Joe Biden is still driving the car his father gave him as a wedding present – a 1967 Red Chevrolet Stingray Corvette.  Isn’t that amazing.  That is a man who loves his car and obviously looks after it with a passion.  I hope he has a right hand man/woman who can look after it while he’s being President.

A boyfriend from the 1970s had an Austin 7 and collected me from a hockey match in it.  I’m not sure if there was a door.  I just remember climbing over to get into the passenger seat!  He was part of the 750 Motor Club and we went to Silverstone for their annual event and I ended up assisting on the grid.  When those motors come round the final bend of the trial lap and your toes are on the white line, you just hope they have good brakes!  The relationship didn’t last very long so it was the nearest I have ever been or sat in a classic car. There is a local dealer in classic cars in the area as they have put a display along the street during the Hampton Hill Christmas lighting-up night.

Do you have a passion for old cars, your current car or are you hankering after something classic, something sporty or what?

Has anyone done the London to Brighton car rally?  I would love to do that.  It would normally be running around November, wouldn’t it?   Now seems like a good time to re-watch Genevieve!

Our website host, John Q, based up in the Highlands, not only is a top notch greenkeeper, designs and hosts websites, lives with his family and several donkeys, but also has another hobby … 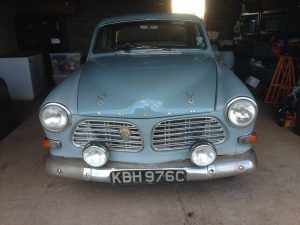 He’s currently restoring this 1965 Volvo Amazon and hope to have it back on the road next summer!

Thanks for sending the photo in John.