Margaret B kindly offered to lend me her book on The Poupart Family in the Borough of Twickenham 1874-1936 and a couple of other local history books to see if there was some useful information we could use for the Centenary.

I collected it yesterday outside the club while out on an early lunch walk while the girls were catching up with each other. 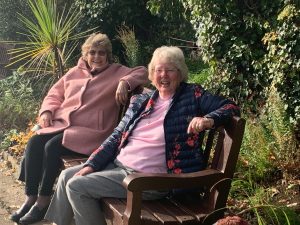 Margaret and Beryl met working in Boots in Whitton over 40 years ago and have stayed firm friends ever since.  They have a wonderful assortment of anecdotes from days of yore and it was such a tonic for those few minutes as they regaled some of the stories and we all had a good laugh in the sunshine.  Fresh air, sunshine, real people (one at a time!) and laughter – can’t beat it! 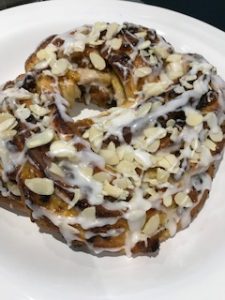 Beryl’s daughter emailed to say she and her Mum had been baking the previous weekend, producing an Apricot & Pecan Advent Wreath for Beryl’s other daughter.  Apparently, it’s not like a calendar and you can eat all of it as soon as you get it!  Well done, Beryl & Jayne.

I forgot to ask Margaret whether she had been jamming in her kitchen.  I wonder if she will now be doing that to Sophie Ellis-Bextor’s new album “Songs from the Kitchen Disco”?!