I hope you all had a good weekend and managed to do the odd downpour.  (Mine would have been improved if the bloomin’ router had arrived.  I refuse to pay for hotspot wi-fi any longer!)

We had a great game v Chertsey on Saturday.  It was the first time many of the Chertsey players had been on a bowls’ green since last August and they were so pleased to get out and play!  Th 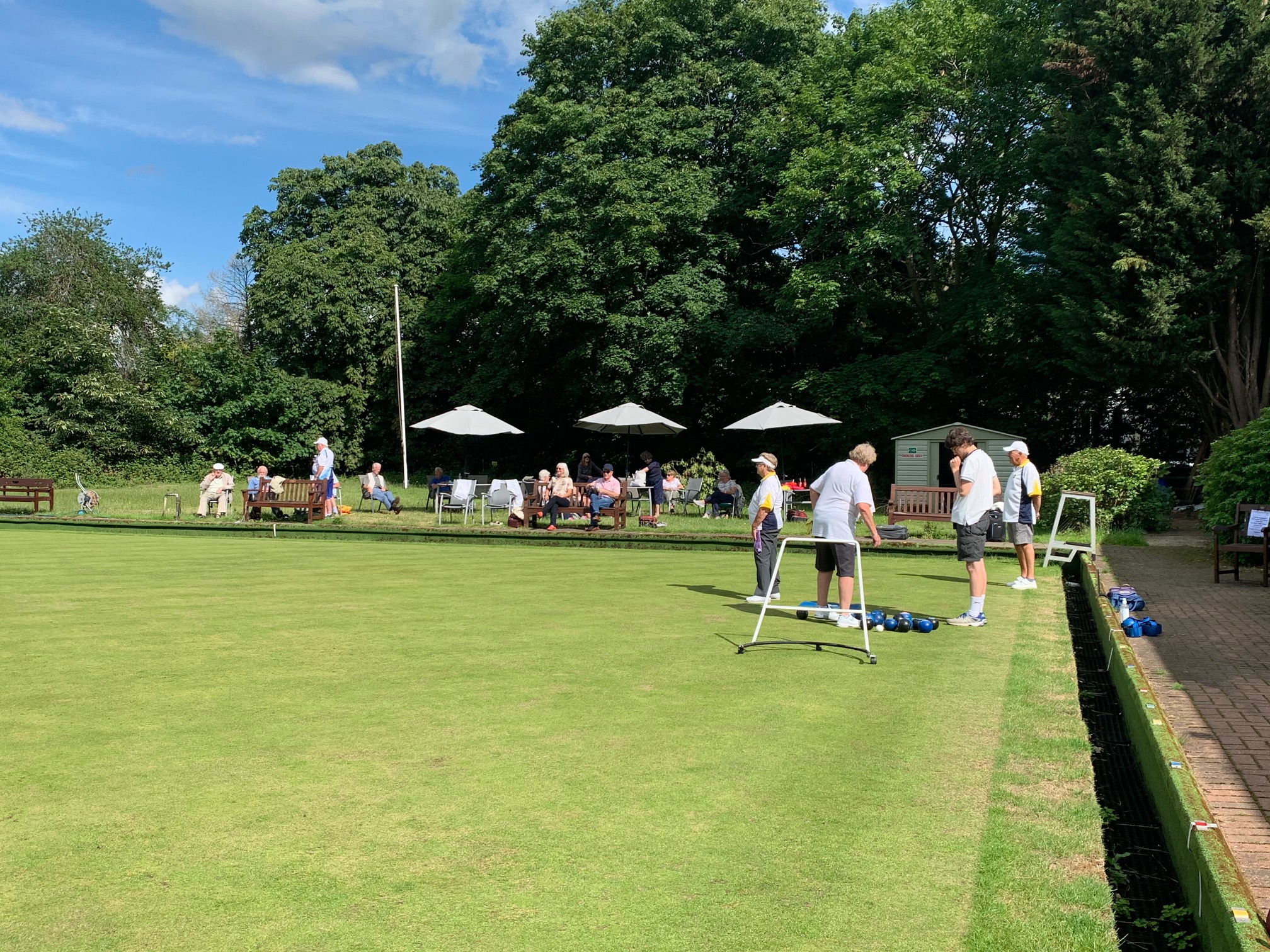 eir own green won’t be open for another couple of weeks.    I think there was a runaway rink under Dave P‘s skippering and a good win for Steve G‘s team.

Norman’s team were doing ok until we dropped a 6 and Dawn managed to miss a score out on one end so that instead of winning 16-15, we lost 15-16.  Doh!  Norman played well with Terry M’s bowls and Sarah and Dawn were a bit in and out but we were trying, honestly!

It was brilliant to see so many friends coming along to enjoy the sunshine and company – Tony & Shirley O, Terry & Ann M, Reg (many people would be envious of his head of hair – he looks great!), Nadine, Jean, Corale, Beryl B, Brenda D, Colin M & his wife (apologies, I can’t remember her name), Gerry, George, Bob & Frances, Ron & Mo E, Lucy & Merve!  It was difficult to get a photo when they were all there as well as concentrate on playing!

Peter T and Norman exchanged elbow shakes.  Norman was very pleased with the overall win  and  claimed  the  victor’s trophy.  It will be up for grabs again on the re-match.  Might have to have a best of three!  (Apologies the image is rather dark – we did finish before 7 pm, so not quite sure what happened to my phone.) 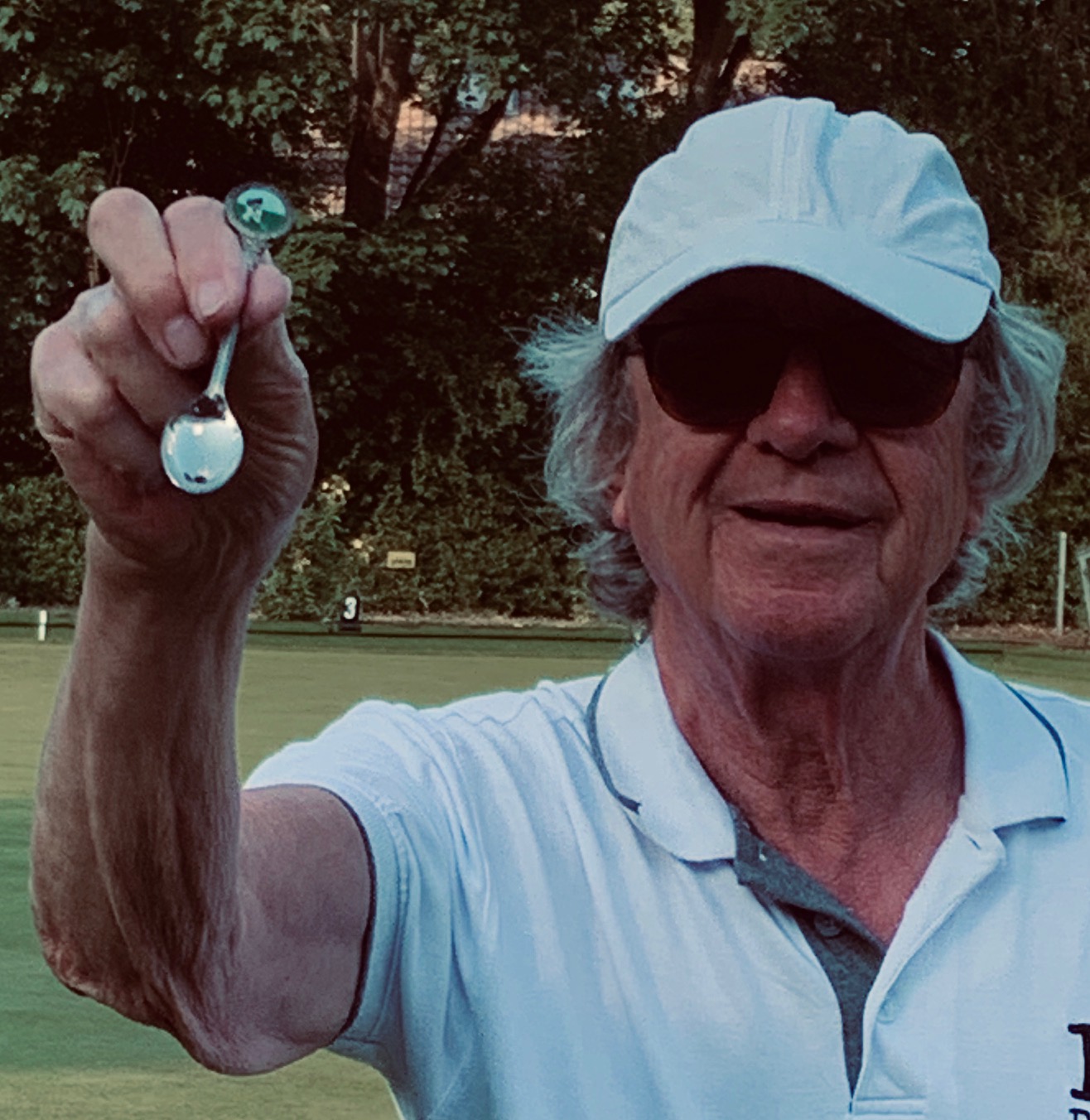 Laurence was also on a winning roll with his Rock Cakes.  He’ll be making some more for this week!

Geraldine H, Gym and Dawn had a re-match v Kevin K, Richard H & Richard D at Hampton on Sunday morning.  The green was playing very well indeed.  It was just a shame that we three couldn’t match Kevin’s three.  You what it’s like when you don’t get the rub of the green.  We certainly didn’t get it but then again, we didn’t play well enough to deserve it either!  Anyway, Hampton are looking for a home and away triples game on a Sunday.  Please let me know if you would like to play – is Sunday better for you?

Chris C from Teddington saw our recent post and have we are now playing them at CP this Saturday at 3.30 pm.  We have a game v Bishop Duppas away on 4th July and a return at CP on 11th July.  Please let me know if you would like to play.  It would be good to get more of you on the game but if you just want to spectate, that’s fine.  It’s lovely to see you chatting away from a distance.  Maybe by this weekend, you can sit a bit closer!

Strawberry Hill are opening today, I believe.  Good luck to them.  Fordbridge Park only have one playable rink at the moment, but hope to come over and play in August.